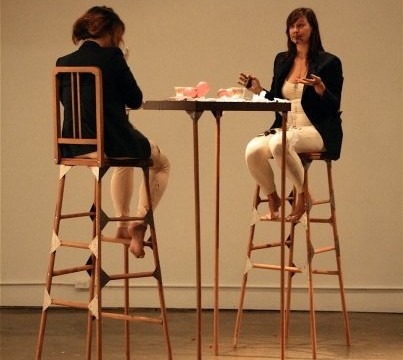 My practice often explores the boundaries of two different realms, examining the authenticity of their own existence and their relationships. One of the objectives of my work is to question social norms, cultural habits, and taboos that are inherently anonymous, unacknowledged, and sometimes taken for granted. Some of the recurring themes in my recent works have been quotidian culture and technology, with ontological focus within the context of performance and installation.

I work with mediums of installation, sound, video and performance, and often combine them to create a multi-disciplinary work. Audience participation is a significant element in my work, especially in performances, as the audience often determines the ultimate nature of the work. I utilize provocation and humor as confronting devices to establish a different sense of social and cultural awareness.

Works I have made tend to feed off each other, and they usually become foundations for future work. My most recent work, entitled “Unknown Day”, is a series of video documentations of my private performances that are derived from everyday tasks such as cutting nails, fixing a clock, and dishwashing. It was a virtual journal of my dysfunctional activities (performances) recorded on a standard video camera, and its entries were transferred to VHS tapes as physical documents. In this piece, I utilized various mundane tasks to allegorically reveal emotional distresses and anxiety stemming from living in a contemporary society – turning these basic routines, closely connected to one’s survival, into a radical source of expression ultimately altering the meaning of ‘daily life’ and its existence.

During my residency at Luminous Bodies, I will explore daily activities further, but this time within the specific context of the digital realm. I will explore the nature of digital technologies such as video cameras, computers, and/or smart phones, and how they might shape our behaviour, exploring how we perceive our bodies through digital lenses. I will present the piece as a live performance accompanied by a video projection.

Dahye Kim is an emerging artist who lives and works in Toronto. She recently graduated from OCAD University with BFA in Integrated Media.