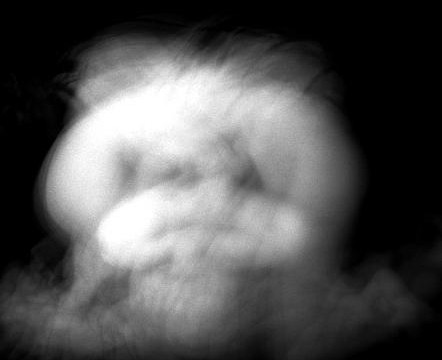 What emissive elements of the body are left behind in space and time when the physical body is absent? Do residual elements of the body such as breath, hair, heat impressions or spiritual impressions evoke presence or proof? What can photographs reveal that would otherwise be imperceptible? Through these questions my work attempts to capture experiences that have never entered memory in the first place, to blur the trace of the subject and the boundaries between it and the space it occupies, and render the invisible, visible.

I use the camera as a surgical tool to not only reveal the human form as only the camera can see it, but also to deconstruct and reconstruct the human figure, releasing and restructuring internal energies trapped within the body’s epidermal barriers. I create non-existent forms, existing in non-existent spaces, releasing human energies that exist, but are untraceable with the human eye.

I work to conflate the skin of the human body with that of film, the skin-like surface of the photographic paper, and the traces of light that move between said skins. I see the grain of film to reflect the grain of the body. While traditional photographic methods mirror the subject of the body, I work to synthesize the skin as cellular and the films as celluloid; all the way down to the particles that make up a body’s energy via surfaces and light sensitivity.

The work is inherently performative and through process, generates private rituals that are often documented but not accessible to the viewer. Through repetition and endurance, I gradually breakdown the mental and physical layers of the body. Internally, the deconstruction and reconstruction reveals itself in the images. Improvisatory, gestural movements and impressions question the performative or non-performative language of the body. They challenge the awareness of energy and spirit and discover what exists consciously, sub-consciously, unconsciously.

During Luminous Bodies, my project will continue to explore the elements that are crucial to my practice while negotiating the body and photograph as object, void, and container.