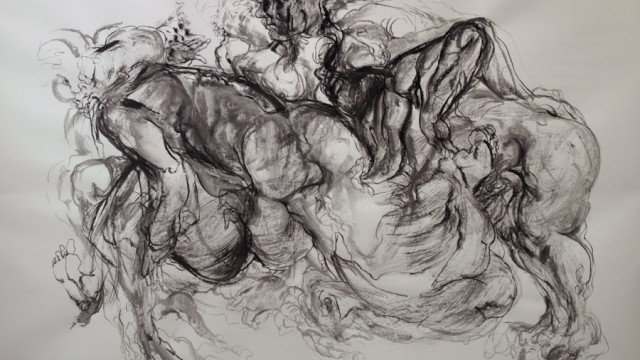 My primary medium is drawing, in large to over-life scale, but I also paint and sculpt. Almost exclusively, I express myself through the use of the human figure, manipulating it in whole and in part, overlapping and combining line and form that results in a fusion of recognizable shapes within abstracted compositions. Typically, I work spontaneously without reference to models or sketches, even while working on a specific idea, with the exception of sculpture projects that generally require much pre-planning and organization.

I am interested in continuing to explore how effective artists can be in influencing restrictive cultural standards in the areas of sexuality and physical attractiveness, especially where these intersect with a lack of knowledge due to enculturated sexual shame, physical modification, and pain. Countless artists and bodies of work focus on critiquing current Western patriarchal ideals, but I wish to explore possible proactive, rather than reactive, models of intervention, perhaps involving a bit of absurdity and play. At the baseline approach, much that might currently be considered ugly can be made beautiful through art, but what if we as artists set out to establish new and somewhat random practices that inherently offer critique as well as new forms?

Integral to this process is furthering my ongoing explorations of the challenges of using representations of the body as means to express unpleasant or unwelcome knowledge and/or experiences. I’m particularly interested in understanding where the boundaries lay in individual viewers, the veritable tipping points between attraction and repulsion, and what specifically in my work influences those thresholds in the eye of the viewer.

At the residency, I will create a new series of large scale and small drawings in a variety of media, and experiment with found and soft sculpture ideas.

Lynn Schirmer has an extraordinary personal history, the details of which are almost guaranteed to invite incredulity. She is a survivor of torture and medical experimentation, beginning in childhood, both private and tax-funded. By exhibiting her artwork, she hopes to raise awareness about these ongoing, yet widely unexposed human rights abuses committed against children and adults in the US and other Western nations.

In service of this goal, in 2010, Schirmer intentionally created an additional alter ego named DIDiva. As a public persona, she is designed to help combat the stigma and ignorance surrounding responses to trauma such as dissociative conditions, but more specifically, to challenge the negatively sensationalized caricature of Dissociative Identity Disorder popularized by Hollywood and the media. DIDiva has served her well as a flamboyant Mistress of Ceremonies and hostess during recent showings of her artwork. Schirmer also holds forth at DIDiva.com, an informational website about DID.