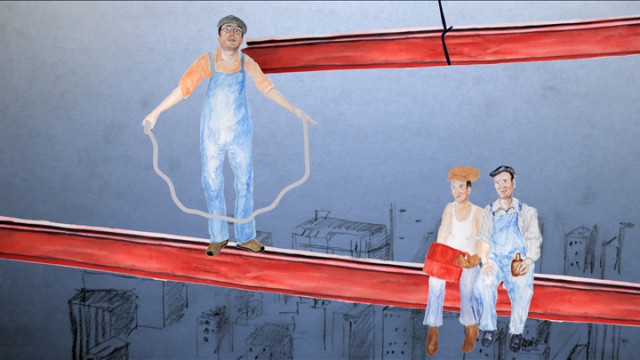 The primary target of my current art practice is gender stereotypes, particularly those pertaining to contemporary masculinity. Specifically, I focus on an analysis of gender from a nerdy, straight male, feminist perspective. From religion to popular culture, my artistic endeavors are focused on arenas where the ubiquitous cultural concept of the ‘real man’ is promoted as an ideal. The cliché ‘men they’re all the same’ refers to a kind of masculine essentialism or a normativity that creates a kind of otherness in those who do not subscribe to it. This idea resonates for me, partly because of my own internal conflict. Growing up I was self-conscious and shy and although I was attracted to women, I both questioned and reacted to this masculine ideal. As an adult I have consciously attempted to disidentify with this ‘real man,’ although, I am aware that as a white, heterosexual male, I am advantaged by the patriarchal structures that have resulted in this concept.

Using humour and satire, animation, installation, drawing, watercolour, oil paint, performance and music; sometimes together, sometimes separately, I bring together a variety of media in order to create new ways of looking at men and the world at large. Using this multi-disciplinary approach I am able to create my own fictional worlds where I embody various characters from the stereotypical male loser (in the form of my animated alter ego The Whatsisface) to the aforementioned ‘real man’ (in the form of my faux country rock star alter ego Stan Dickie).

For the Luminous Bodies residency, I will continue this research and expand on my work concerning the socio-cultural positioning of the hetero-normative male body in contemporary society. In an era where more and more men are becoming aware of, and sensitive to, gender boundaries, how is male sexuality affected? At the same time as this awareness and sensitivity grows in some sectors of male society, there are also men’s rights advocates who are actively working to undermine gains made by feminists. In addition, rape culture has infested high schools, college athletics, and social media. My work reflects my belief that it is important for males to break free from this kind of toxic masculinity and show solidarity with women and the feminist movement.

I am interested in utilizing the time in the Luminous Bodies residency to create a new body of work that deals with these questions using my own body as a starting point. During the residency, I plan to focus on 2D media including drawing, painting and photography in order to satirize and/or deconstruct the 21st century men’s rights movement. Using my alter egos, Stan Dickie and The Whatisface, I will explore different ways of satirically situating my own body in realm of the men’s rights advocate (MRA), thereby attempting to understand both what makes him tick, and the level to which this kind of masculinity has affected me personally.

In addition to this, Simonite’s cartoons  have appeared in the University of Manitoba student newspaper the Manitoban and were distributed across Canada by the Canadian University press from 2005 – 2007. They have also been published  in  diverse  publications  such  as  Canadian  Dimension  Magazine  and cbc.ca.  Simonite debuted his webcomic, Gorilla in the Midst in January 2013. It can be seen at gorillainthemidst.com.