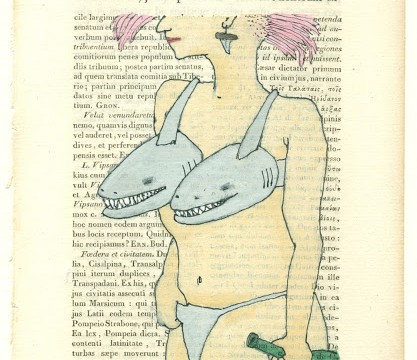 Clothing is an artifice to educe a conjuration, effect a spell. Apparel can be a charm worn to invoke professionalism or an habiliment donned to ensure enchantment. What’s common to all its many uses is the power in clothing to affect the world around its wearer, its ability to subtly manipulate others. This project, The Hidden House Catalogue of Artisanal Brassieres, explores manifold constructions of a singularly powerful fétiche, the bra and bra semblants. It is a notional documentation of an artisan’s efforts to alter the emic knowledge of a culture through wresting a fundamental though typically sequestered garment from hiding and channel it’s juju as an agent of change. It is a celebration of factitious Irish-American designer and maker Maura Ò Paì. Through creation of a fictive archive of her design drawings and production of an expository/critical text the residency project will reveal how Ó Paí’s works shed light on constructions and de-constructions of identity and gender roles, and subversions of constraining perceptions of the body.

My goal from the residency is to continue to amass both drawings and text for an eventual definitive “catalogue” of Ó Paí’s work with the aid of a community immersed and articulate in issues and philosophys pertinent to discoures on the body. Towards this end I will perform two aspects of my artistic practice, writing and drawing on alternative papers, while researching from critical discussions and other input from fellow residents. The goal of the project is to present Ó Paí’s work to the world in a volume that is instructive, challenging, and never loses sight of the gentle humour which encourages sodality.

Bob Morouney is disinclined to talk about his 1987 BA in Eng Lit, or his Fine Arts studies 1999-2003, ditto Japanese 2003-5, all at a university in Canada’s Atlantic Provinces though he cannot mention which due to a restraining order. Bob admits he instigated Hidden House Press, his infamous printmaking atelier, in 2004. He faked his death from 2005-6 to study shodō with Nakamura Shouin in Funabashi, Japan, and engrave at the Machida City Printmaking Museum. From then until now Bob’s unwittingly participated in numerous group exhibitions. He’s had at least as many solo exhibitions as one can count on both hands after a minor industrial accident. His work is in the provincial Art Bank collecting interest. An experienced workshop leader, Bob’s also participated in uncounted vagrancies, absences, and several residencies in Canada and Ireland. In 2015, Bob’s The Red Book, a poetry manuscript, unaccountably won first place for the Alfred G. Bailey Prize. Bob’s an unabashed member of the Nova Scotia Printmaker’s Association, the New Brunswick Writer’s Federation, a juried member of the Nova Scotia Designer Crafts Council, and the Otter Creek Medium Rare Bird Watchers & Eaters Society. Bob married potter Rachel Morouney. They live in Otter Creek, NB. Their motto is: art puts beauty into the world, pottery puts food on the table.